I just finished a novel about a man who discovers hyperactive Viagra 100 years ago, and uses it to extract semen from the world’s great men, for the purposes of selling it to desperate child-seeking women. This was written by an Englishman; methinks an American would have gotten all scientific about it. Christopher Lehmann also believes we are incapable of good political fiction:

What’s more, this stubborn moralizing impulse is what makes American political fiction, even today, such watery and unsatisfying literature: It deprives writers of the best material. Don’t the intrigues sprouting from our well-known human flaws and excesses ultimately make for more engaging plots and character studies than the falls from grace of a thousand or so Washington ingenus? You can consult any of the scores of wiser, better-written European novels of politics–Fyodor Dostoyevsky’s The Possessed, Ignazio Silone’s Bread and Wine, Stendhal’s The Charterhouse of Parma, Gunter Grass’s Dog Years, Joseph Roth’s The Spider’s Web, to name but a few–and see how much richer and more nuanced political fiction can be.

He didn’t enjoy Thank You For Smoking, which I rather liked. But the point is well taken.

I just stumbled upon David Grann’s 2004 profile of Mark Halperin, he of the latest gossip-fest about the 2008 campaign. If you avoided the story, just read this to know everything you need to know about the concerns over the book – and Grann wrote this five years before the book came out!

“There is always some new tidbit,” Mark Halperin said. “You just have to ferret it out.” It was the first day of the Republican Convention, in New York, and although the sun had not yet risen, he had already laid out all he needed for his peculiar trade—three television monitors, a laptop, a BlackBerry, a cell phone, a pager—in a makeshift space on the fifth floor of Madison Square Garden. Outside the Washington establishment, Halperin is known, if at all, as a journalist (his official title is political director of ABC News), but within it he is considered the leading purveyor of inside dope. As the founder of The Note, a political news digest that appears on the ABC News Web site each weekday morning by eleven o’clock, he collects information the way bookies keep tabs on the latest odds, or photographers chase the fading light. He collects polling data, no matter what the time of year or the size of the sample. He collects any rise or fall—even the smallest blip—in the projected electoral count. He also collects dirt, such as the unsealed divorce records of Jack Ryan, a Senate candidate from Illinois, which detailed visits to an alleged “sex club,” and which forced Ryan out of the race. He collects other things, too: arcane statistics from documents that government agencies churn out but few read; embargoed political books (The Note footnoted Kitty Kelley’s gossipy portrait of the Bush family twenty-four hours before it was released, beneath the teaser “Here Kitty, Kitty”); wire reports; radio transcripts; pieces of legislation; the guest lists of Georgetown dinner parties; and other minutiae that are of little interest to the ordinary citizen but are essential to his calling (“2:00 p.m.: Sen. John Kerry and his family hold a barbeque at the Heinz Farm, Fox Chapel, Pa”). Mostly, though, Halperin collects leaks and scuttlebutt from the campaign consultants, strategists, pollsters, pundits, and journalists who make up the modern-day political establishment, or what Halperin calls “the Gang of 500.”

The story gave me a building sense of horror as it went on – sort of like The Hurt Locker, without actual bombs. Here’s to reasoned, thoughtful, narrative argumentation.

Here’s a thought experiment for you. Redrawing the 50 states based on population:

Renaming states “Lincoln” and “The Delta” is kind of cool. But, of course, this map is acceptable only because it left Missouri alone.

All year I’ve been waiting for Obama to flex his narrative muscles, to tell the story of his presidency, of his Administration, to tell the story of where our country is going and why we should help deliver it there. A coherent, accessible, compelling story—one that is narrow enough to be held in our minds and hearts and that nevertheless is roomy enough for us, the audience, to weave our own predilections, dreams, fears, experiences into its fabric. It should necessarily be a story eight years in duration, a story that no matter what our personal politics are will excite us enough to go out and reëlect the teller just so we can be there for the story’s end. But from where I sit our President has not even told a bad story; he, in my opinion, has told no story at all.

But thankfully, in good conscience, I think he’s right.

I didn’t know this yesterday 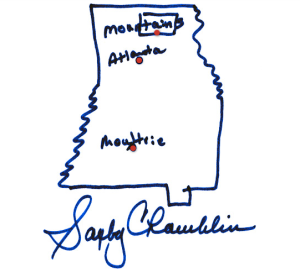 Ergo, Saxby Chambliss has no f-ing clue what his state looks like. More Senators draw their states, here. My Senator did an admirable job with the boot heel, but missed Northwest Missouri.

The award for best Berlin Wall package this week goes to the New York Times, with its series of before and after photos: 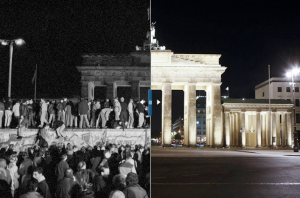 It’s cooler than that screenshot makes it look. If you must read and look at more, I’d recommend Esquire on the art of the wall; George Packer on the wall’s replacement (gay clubs, among other things); Magnum Photos on East Germany well before the wall’s fall.

Meanderings
Create a free website or blog at WordPress.com.